Near the end of July, my husband and I took our niece to MammothCave which is about 4 hours away. The traffic getting through Cincinnati into Kentucky was horrible, for it only being 2 o’clock when we went through it.  The four-hour dive turned into something a little over five hours, but we did get an hour back since Mammoth Cave NP is just over the central time zone line.

For our weekend stay, we stayed on park property at the Mammoth Cave Lodge, in the Sunset Terrace rooms.  The room was decent, close to the visitor center, and most importantly had air conditioning and an en suite bathroom.  We ate breakfast at the lodge, which was decent buffet with an omelet station. The whole lodge area is nice and has all the basics, plus there is a little convince store that carries some sundries and microwavable food if you need it.

The evening we arrived, we did a quick hike to see the River Styx Spring . The hike was about a mile and half, and our hope was it would tire out our niece before bed.  There was no such luck on that account, I wish I had that much energy somedays.  The hike down to the spring and back wasn’t bad, even though there were steps involved, and we had to do it at a reasonable pace to make sure we made it back to the lighted part of the path before sunset.

The next day we had two cave tours planned. The first one was a short 75-minute tour called the Frozen Niagara. This tour takes you into the living section of the cave where you can see the stalagmites and stalactites.  The ranger leading the tour was good. If you are going to take pictures this would be the best tour to do it on.  However, you will need a very high ISO because the lighting is decent enough to see, isn’t that great for photos.  You cannot use a flash in the cave.  Overall it is a decent introductory tour.  After the tour we had lunch in town, and stopped at the Lost Hope Cemetery on the way back.  I wanted to stop because it was a very little cemetery and looked old. It had some stones dating back to the civil war, but mostly from the First World War.  However, in hindsight, this was probably not the best idea based on our next tour. 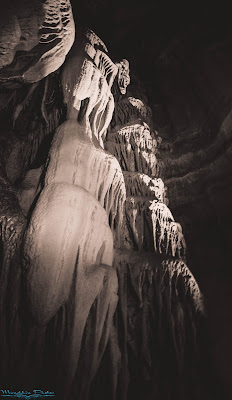 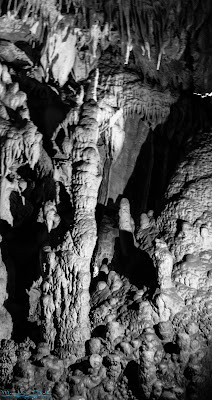 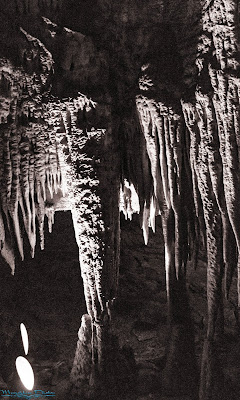 The second tour of the day, was the Violet City Lantern Tour.  This tour is 3 hours and the only light source is kerosene lanterns.  If you are over 16 years old you can carry a lantern, and there are approximately 10 lanterns in total.  The first part of the tour is simple and on flat ground. You go past old tuberculosis huts, see the “sunset/sunrise” demonstration, and the giant’s coffin.  My niece got a little scared after the giant’s coffin and being in total darkness during the sunset/sunrise demonstration. However, the thing that did not help was the talk about the dead Native American in the cave.  Yes, there is a dead person in the cave, but you do not get to see were he is buried.  After that story my niece was ready to go, and we still had about 45 minutes left of the tour.  The ranger that led that tour was very good, knew her history, and was entertaining at the same time.  However, this was not a tour for pictures, even with a very high ISO you weren’t going to get anything.  I got one picture of our ranger in the cave, only because she had the lantern close to her face.  In hindsight I should have just left the camera in the room.  I highly recommend the tour, and you either want to be upfront with the ranger or in the back to get more light from all the other lanterns.

That basically was our weekend at Mammoth Cave. I recommend going to Mammoth Cave for at least a weekend. We did Friday evening to early Sunday morning which gave us one full day.  I would say you don’t need more then two days if you are going to hit some of the other little attractions outside the park.  Also staying on park property was nice and cost about the same as staying in a standard hotel.