On August 5th, I hosted the second meet-up of the Dayton, Columbus, Cincinnati Cosplay Photo Shoot Group at Homestead Metro Park in Columbus. Homestead Metro Park is nice park, with several features to including pavilions, a playground, and a covered bridge, which we rented for the event.   For this event we had 13 attendees of which 6 were cosplayers, 5 were photographers, and 2 were assistants.  This is a decent turnout for the second meet-up of the group.  The event was three hours, which gave everyone plenty of time to explore the park while still working with everyone in short one-on-one sessions.

The event went really well, except for the Girl Scout Troop and parents who could not read the sign.  Our group rented the covered bridge for the event. There was a sign in front of the bridge that stated “Reserved for DCC Group.” The troop leader decided to ignore the sign and hold the Girl Scout Bridge Crossing ceremony, where you go from Daisy to Brownie or Brownie to Junior in the middle of our event without asking.  They completely ignored the sign, and it was obvious we were using it.  Now being a former Girl Scout, this greatly saddened me.  If the troop leader would have asked to use the bridge it would have been different, but they did not.  When I went up there to state it was reserved, the response I got was “it’s ok we are Girl Scouts”.  No, I’m sorry, but it is not ok, if you wanted to use the bridge you either 1) reserved it when you knew you were going to have the ceremony, or 2) asked the person who held the reservation if you could use it.  Just some common courtesy would have been nice.  Other from that it was a nice event.

Because our events are currently small I get to work with all the cosplayers.  I’m not going to talk about all the photos from the event just two I really like.  This first photo is of Eowinth Cosplay, who recently move up to Ohio from DC.  She was also part of the DC Cosplay Photo Shoot Group, that I used to work with.  Eowith Cosplay was Fang from Final Fantasy, which was perfect for the weather and the location.  The first image is a powerful pose framed by two pine trees.  This one worked out nice because a slight breeze came through to add movement to her skirt.  The speed light was on a light stand to my right.  The second image was taken in the tall grass.  I like this image because it appears as though she is stalking or hunting something.  This was shot in direct sunlight, with the speed light set on a light stand to the photographer’s right.  When editing I ensured I had a blue sky and had to watch the highlights. The third image is of Kamikaze Kendra Cosplay as a gender bent Frodo from “The Lord of the Rings”.  I like this image because it has a cinema quality about it.  I place her in the shade of two trees, and then placed the speed light up and my right.  I then told her to stab the light.  When editing I added some vignetting, had to watch the yellows in the greens. 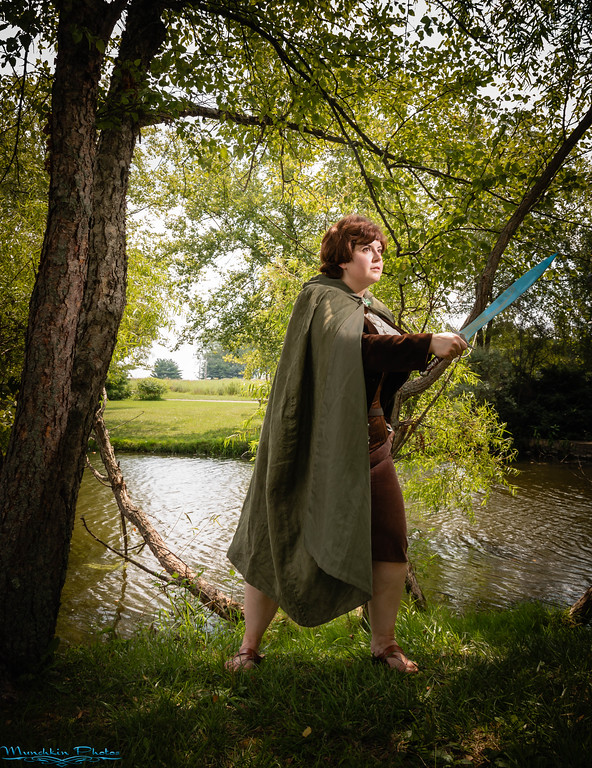 Overall, I would say the meet-up was a success.  The next one will be the Cincinnati meet-up the first weekend in October.  It was supposed to be in September but was rained out.  I am really looking forward to the one that will be hosted at the end of October at one of Ohio’s castles.  If you want to join the group you can find us on Facebook here: Dayton, Columbus,Cincinnati (DCC) Cosplay Photo Shoots.