Disney Princes shoot at the Cloister

On March 26th, I attended a DC CosplayPhotography meet, held at the Cloister in Maryland. The Cloister is an old summer home based on several types of medieval architecture.  It was the perfect setting for the Disney Princess theme of the meet up.   This was a nice location because there were several different locations on the grounds from a spiral stone staircase, and outside stone garden, and a windmill.

This shoot did allow the photographers to use more than just handheld equipment.  At the shoot, I used a Cannon 70D with an 18 - 200mm lens, an external 600EX-RT, and Yognou radio triggers.  The flash was mounted on a light stand with a 32-inch umbrella shoot through umbrella.  The only standard camera setting I used was an ISO of 400 for all the photos, but all other settings I modified based on the light of the location.   I will discuss three of my favorite shots from this meet up.

I considered this shot of Sara Cosplays doing Merida from Brave my number one shot from the shoot.  I placed her on the spiral staircase near the indoor window, looking toward the window.  I then placed my flash on the opposite side of the window to produce window light.  I was at F4.5, with a 1/320s shutter at a focal length of 18mm.  I pulled the photo into Lightroom and adjusted the white balance for flash, upped the exposure a little from the original image, used a strong contrast, then upped the clarity to 21, sharpened the image and increased the luminance to 37.  I also used a few presets to finalize the image to make it pop.  I am very happy with how this image turned out.

One of my other favorite shots is of Life of Cosplay doing Spring Elsa from the Frozen short.  I like this image mostly because it is subdued and contemplative.  I also like how the lighting on this shot turned out. In this room, there was a window to the left, which did not produce enough light, so I placed the flash there to bump up the window light.  I was at F4.5, with a 1/320s shutter at a focal length of 18mm. I pulled the photo into Lightroom and adjusted the white balance using a custom setting, decreased the exposure some, increased the clarity to 15 and the luminance to 15. I also added vignetting and used an HDR preset on the image.

Finally, there is the Xena Cosplay as Maleficent.  Several photographers shot this pose at once, because it was such a perfect location. My flash was set to the right of the cosplayer.   I was at F5, with a 1/200s shutter at a focal length of 20mm. In Lightroom, I adjusted the white balance, but did not touch the main exposure but did increase the clarity to 20, used a strong contrast and increased the sharpness to 46 and the luminance to 27.   I then used a few presets to pump the image, and added some vignetting to finalize the image. 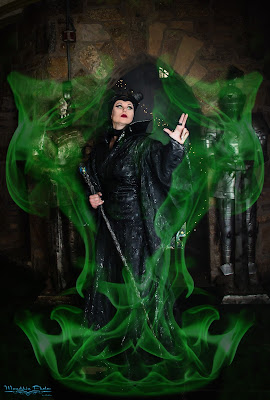 Usually, I am not a big fancy/extreme edit person; however, the Maleficent image seemed like the perfect image to play with.  So I found a fire image, which is actually a fire in a cupped fire pit and over laid it on the Maleficent image, using the lighten layer type with an opacity around 50 percent.  I then copied that layer and mirrored. I then flattened those two layers, did a bit of clean up using the eraser tool. Finally, I changed the color of the flames from red to an eerie green.   I like how this image came out and how the flames give it an extra pop.