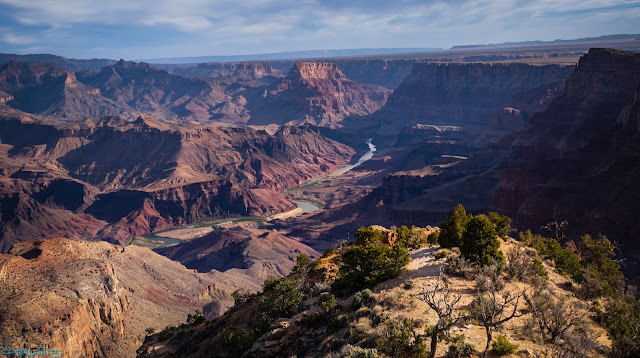 The road trip out to the Grand Canyon is a wrap. We traveled 4,560 miles round trip not including any side trips, driving in the park, or detours.  It took us 4.5 days to drive out to the Grand Canyon and 4 days to drive back.  We spent five at the canyon.  We hike approximately 9 miles, not counting the walking we did in the village area. Over the course of the trip we went through 3 one-gallon jugs and 2.5 flats of water. It is dry out west.

As for photography stats I took 1,491 frames across my Canon 80D, my cell phone, and a little Fuji point and shoot camera.  I mostly shot using ISO 100.  My most common aperture was F8 followed closely by F10 and F9.  My most common shutter speed was 1/320s followed by 1/250s.  With my most common focal length being  18mm.  For a majority of the trip I shot in aperture priority mode, which made my life easier and allowed me to quickly compensate for the sun and changing conditions.  I did shoot in manual mode for the sunrise photos and my feeble attempt at astrophotography.   You can see all the images from the trip here: Road Trip to Grand Canyon NP. I divided the photos up into galleries by subject/interest to keep it simple.

Overall the trip was good but there are some observations.  Why doesn’t Akansas, Oklahoma, Texas, New Mexico, and Arizona believe in regularly spaced rest areas?  I get that on most of the I-40 the speed limit is 70 mph that does not negate having to use the facilities, those states seem to be relying on gas stations to fill the void.  Also Texas, picnic areas do not count as rest areas if there are no bathrooms, furthermore why would I want to picnic in the blazing sun without shade? I am also disappointed in both the New Mexico and Arizona visitor/welcome centers which were closed both times I attempted to visit them, and get my state map.  Both states claim to be very welcoming, but closed welcome centers don’t seem very welcoming to me.

The Grand Canyon itself was nice, and I felt that five days was a good number of days, for only doing the rim trail, a mule ride, and one short hike into the canyon.  They really do mean it, when they say ensure you are not doing anything strenuous between 10:00AM and 4:00PM. The sun is brutal.  I feel the canyon is prettier by the “Desert Views” and “Watch Tower” areas as compared to the views around the visitor center and village.  Also, for good pictures you really do need to be viewing the canyon at sunrise or sunset to get the dramatic shadows, and avoid haze from the midday heat.  I  recommend doing the hike to Ooh Aah Point, to get into the canyon, the view is great.   I was worried about how close to the edge I would be during the hike, but in most cases you are not that close, so I was comfortable. If you do hike down to the point, remember water and your hiking sticks. 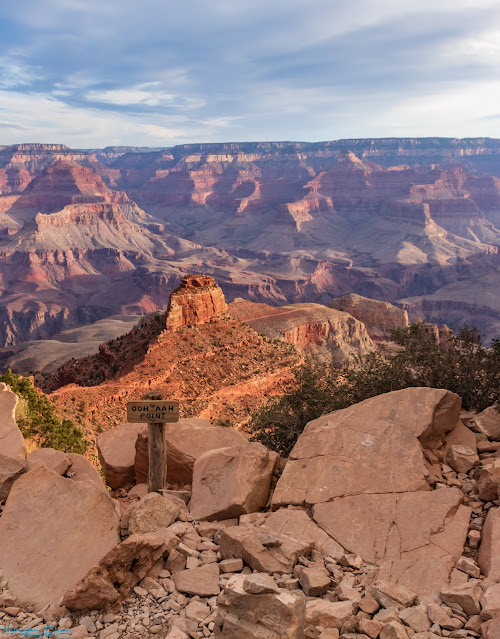 As for the lodge and the food, they were as expected. Maswik Lodge, where we stayed, is away from the main lodge cluster of Bright Angel, El Tovar, and Thunderbird.  However we could easily walk to Bright Angel or take the bus.  The bus system is great, and I recommend using it to get around, since it starts running at 4:00AM and stops running at midnight, and will save you trying to find parking.  Park once and don’t worry about it.  Maswik was clean and a nice typical room.  The food in canyon village was so-so and never very hot. The worst was the cold in the center breakfast burritos we got at the Maswik dining hall. The prices are typical park prices, so don’t expect to eat cheap unless you are making your own food.  Finally, as for drinks at the bar, I hope you like moscow mule variations, because they have a whole section devoted to mule drinks. My personal favorite was the Shriveled Apple Mule made with Jack Daniels Apple, Martinelli’s Apple Cider, Ginger Beer, and lime.

As for the road trip in general, being along I-40 and parrelling old US Route 66, allows you to feel nostalgic and get a feel for the “Mother Road” as it was named by John Steinbeck.  We did stop at several historic Route 66 locations. I just wish in some of the stops, we were there at night so I could capture the neon glow on several of the old signs.  I liked seeing some of the vintage locations like the old Tower Conoco Station, which was the inspiration for Flo’s in the movie “Cars”.  You’ll see in some of my photos I edited them to capture more of a vintage feel, so it looks like they might have been taken in the 1940’s or 1950’s.  If you are into nostalgia, doing a Route 66 road trip might be the thing for you.

Side Note: I want to go back to Cadillac Ranch with a model and one of my parachute dresses.  I think I could take some awesome photos there, especially at night.

I think the worst part of the whole trip was driving through the torrential downpour on the way home between Oklahoma City and Memphis. The rain was so heavy it was hard to see and we had to slow down.  The other not so great thing was being sick on the side of the road one day, due to medication I was taking. Let’s just say Egg McMuffins don’t taste great the second time around. I also am mad at myself for forgetting my deodorant, I swore I threw it in my bag in the morning but guess not. So we had to stop at a Dollar General in the morning to pick some up, more of an inconvenience than anything else.

Finally,  the trip was good and I’m glad I visited the Grand Canyon and got to drive along parts of old Route 66. But I’m not a southwest or desert person.  The National Park vacations are great, but I’m ready to go overseas now, back to Europe or maybe someplace more exotic.