On March 19th I did a couture Queen of Hearts session with Anastasia with a dress from Jennie Couture. For this session I used the dress itself as inspiration pulling key elements such as bushes with roses, playing cards, and flamingos from Disney animated “Alice and Wonderland” to decorate the set.

I drew my inspiration for this session more from the animated version of “Alice in Wonderland” then the live action version as I felt the dress played more off the animated version. For the session I moved through three different set designs, by adding or subtracting elements, while keeping the same red background. I started simple with an implied throne room, by making a throne out of jumbo playing cards, dowl rods, a large piece of styrofoam, and a lot of tape. I then added some topiaries to complete the set. From there I removed the throne while leaving the topiaries for full length shots. I then removed the topiaries and just went for a mess of playing cards. Note I was mad the set of jumbo-sized playing cards I got had two queen of diamonds and no queen of hearts.  I then brought the topiaries back in for the garden feel and added a small pink flamingo as a prop. It was a nice simple flow.

The lighting for this set was rather simple.  The main light was coming from a strobe about 10-degrees off center to my right, which had a 7-foot umbrella with a sock on it. This light was at about ¼ power throughout a majority of the session.  I then had another strobe that was about 45-degrees of center to my left with a round soft box on it, which I alternated the power on depending on mood of the image.  This set allowed me to go from a nice evenly light high key image to a moodier low-key image just by altering the power of the lights and which one the model used as the key light. You can see this set up below.

Now for the actual photo session. For this session I used an ISO of 100 and an aperture of F8, with a shutter speed of 1/250s.  I wanted to ensure everything was in focus so went with a higher F-stop. My focal length ranged from 18mm to 90mm with 40mm being the most common focal length.  While I normally shoot very wide, the size of the umbrella made me shoot further away from the subject and zoom so that the umbrella wasn’t in the shot. For a majority of these photos, I was sitting on the floor so I was shooting under the edge of the umbrella.

I’m going to start with my favorite image from the session, which also was a super lucky capture.  First the light for this image was coming from the 7-foot umbrella with the soft box acting as a light fill.  Then to capture the image my husband/assistant stood off to my right with a deck of playing cards then threw them in front of the model.  This image was captured completely in camera, and cards were not Photoshop’ed in. What makes this an incredibly lucky capture is that the queen of hearts ended up right next to the model’s face. I couldn’t do that again even if I tried.  During post processing I cropped the image, did standard edits, and slightly brightened the models face. I finished the image off with a light vignette and added a blue (highlight)/green (shadow) color grade to the image.  The green in the shadow is very subtle to help balance the red, while the blue helped to balance the oranges. 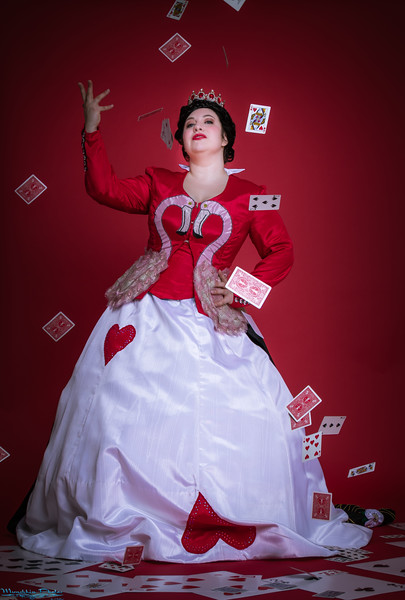 This next image uses the throne and was mainly light using the round soft box with the large umbrella acting as fill. The model had to use her core strength to get this shot as she could not lean on the back of the chair or arms at all.  During post processing I cropped the image, did standard edits, and slightly brightened the models face. I finished the image off with a light vignette and added a blue (highlight)/green (shadow) color grade to the image.

I’m going to end with this sitting image which shows some of the ribbon and embroidery work on the train of the dress. I also like this image because we are treating the little flamingo like a lap dog or cat, and it just screams of that whole villain petting a lap animal. This image was light with the large 7-foot umbrella with the soft box acting as fill.  I was standing on a stool to the left of and slightly in front of the large umbrella. (With that much light it wasn’t going to make a large difference if I was partially in front of it.)  During post processing I did basic edits in Lightroom then had to pull the image into Photoshop and use content aware fill on the edges of the image.  Due to the angle I was shooting at, the seamless did not cover the full area, resulting in the light stand and bare floor in the image. Content aware fill is a life saver when this happens, and it just filled in the missing background. I also brightened the model’s face slightly, and did not add a vignette to this image. I end up not adding vignettes when I use content aware fill.  I finished the image off with a light vignette and added a blue (highlight)/green (shadow) color grade to the image.

I’m very happy with how the session turned out, and do not think I would change anything except add more roses to the topiaries. A select number of images from this set are expected to be published in Spellbound Fairytales & Fantasy April VOL XVII Issue 8. You can see the full set from this session here: Queenof Hearts.