On March 20th I did a session with Kazzy. I drew my inspiration for this session from the color silver, Barbarella promotional photos, as well as still images from Rakiyah – Whoa music video, and 1950’s and 1960’s B-SyFy movies.

To get the right mood for this shoot I first hung a white backdrop which covered the floor, then hung a silver backdrop over that.  I knew as soon as I hung the silver up, the whole set would become very reflective and the lighting would need to be very controlled. I choose to use one square soft box with a grids and a large 7-foot umbrella for fill. To add dimension to the image I also placed gelled speed lights at the top of each backdrop stands angled towards the background but still providing a kiss of color to the model.  From there I added the set pieces which were cubes covered in holographic table plastic cloths, to add to the syfy/futuristic feel. 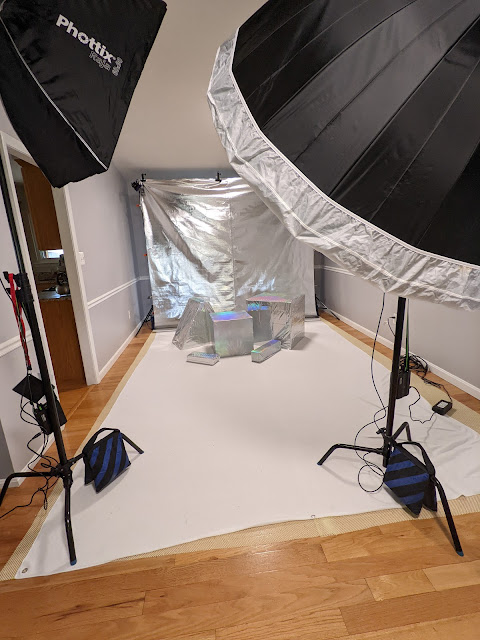 Now for the actual photo session. For this session I used an ISO 100 with an aperture of F8, with a shutter speed of 1/250s for 82-percent of the images.  I went to ISO 400 with an aperture of F5 and a shutter speed of 1/100 for a very specific images where I was trying to capture the glow from the light up glasses.  My focal length ranged from 18mm to 135mm with 28mm being the most common focal length.

One of my favorite images from the session is with the bubble gun because you can see the bubbles, and I just like the overall vibe of the image. (I painted the bubble gun silver, the day before the shoot, so it would blend in.) The reason you can see the bubbles is because they are lit from the side, by the speed lights at the top of the backdrop stand poles. I also like this image because you can see the mix of magenta and blue in the image creating the nice double shadows on the floor. When I post processed this image, I added a bit of light to the models face, and added a vignette. I did pull the image into Photoshop to use a neural filter and the liquify tool to smooth out some lumps in the skirt.

I like this next image just because it is simple and has that bit of futures vibe. Again, you can see the dual shadows due to the gelled speed lights. In this case the main light is coming from the strobe to my left with the strobe to the right providing fill. I did modify this image in during post. I did basic edits in Lightroom, then added a bit of light to the face and a light vignette. I find the vignette helps pull out the colors at the edge of the background. I then processed the image in Photoshop using the neural filter and the liquify tool.  I used the liquify tool to smooth out the back and stomach areas slightly, to reduce bulges created by the tightness of the top and the skirt.  I want to note the model is perfectly well proportioned and pretty, but sometimes cloths do weird things and create rolls when they shouldn’t no matter what size the model is.

This last shot took work to get. To capture the glow from the glasses I had drop all my settings and just go with kisses of light from the strobes and speedlights. To get the shot I first tested setting without the flashes firing until the glasses showed up, I then brought in one speedlight and one strobe at very low powers. My final settings were ISO of 400 with an aperture of F5.6 and a shutter speed of 1/100s. You can see the blue gelled speed light is providing a lot of the light for the image while the strobe is providing just enough light to ensure the models face isn’t blue and completely in shadow.  The pink from the glasses is a nice contrast to the blue. During post processing I did basic adjustments really working on the final exposure and contrast for the image. I also added a bit more light to the model’s face and finished with a light vignette.

I’m happy with how the session turned out, but I think I can improve it in some areas namely the aiming of the gelled speed lights. It was a fun little session and I plan doing it again in the future.  You can see the full set from this session here: Silver

This session also made the cover of Over Magazine.