The inspiration for the session was provided by the couple, as they indicated the center of their universe was about to change.  They provided the galaxy backdrop and their own outfits. I did suggest to them instead of going with balloons with the date, to go with a flag similar to a moon landing, since I was going to make the set look floor resemble a moon to go with backdrop. Additionally, to prepare for this session I went through both pregnancy announcement photos and space inspired photos to come up with some posing ideas and how to best do lighting for the session.

The lighting for this set was rather simple.  The main light was coming from a strobe about 10-degrees off center to my right, which had a 7-foot umbrella with a sock on it. This light was at about ½ power throughout the whole session and light the scene with a nice even soft light.  I used this option since I would be working with a couple and wanted to ensure they were both evenly lit with no hotspots. I did also have a small strip box on the floor opposite the strobe to add some contrast to the floor. I wanted to ensure the floor had some texture, since I placed foam blocks and bowls down covered by a grey backdrop to create the feeling of a moonscape and not just have a flat boring floor.  You can see this set up below. 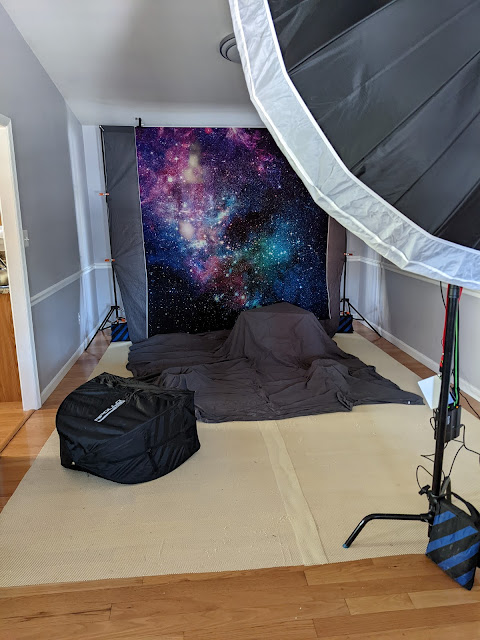 Now for the actual photo session. For this session I used an ISO of 100 and an aperture of F9, with a shutter speed of 1/160s.  I wanted to ensure everything was in focus so went with a higher F-stop. My focal length ranged from 24mm to 90mm with 32mm and 35mm being the most common focal lengths. I did keep these images a bit wide so I could ensure both people were in the image, and had some room to crop to standard sizes.

Since the lighting for these images was the same across every frame, I edited them all the same way. The only changes were how I cropped the images. For each image I balanced the exposure, went in an added some highlights to the couples faces, did a little bit of photoshop to clean up any small blemishes and extend the backdrop in a few images, and then finished with my standard vignette.

The two images below are my two favorites from the session because they are fun. I think they really capture the couple’s personality. Overall, this was a fun little session and I wish the couple luck and happiness on this new journey.