On December 4th, I did a styled holiday session with LoveMSBrickhouse. For this session I went all red with accents of gold for the set and I shot it in two ways. The first was very high key and commercial while the second went low key and editorial. I did this all with one set and just changing the lighting.

I got my inspiration for this set and session from work previously done by the photographer, Lindsey Alder.  I like her work and style thus watch a lot of her YouTube videos where she breaks down how she got the shot. She is also very fond of doing bold colors, especially red, and dramatic lighting.  Last year she did a red-on-red holiday photo that I used as inspiration for this session. My idea was very simple and started with wooden posing box my husband made me, I wanted to turn that into a large present, which I did by covering it in sparkly red wrapping paper. (Note tape doesn’t like sticking to the sparkly wrapping paper). I then added in some other small wrapped boxes, then some poinsettias, a few small pine trees, and strung ornaments up in the background all on top of Savage red seamless paper. To hang the ornaments in the background we set up two light stands, placing u-hook holders on them and then placed a painter’s pole in the hooks. I then hung the ornaments from the painter’s pole. This allowed for some separation between the backdrop and the ornaments while adding additional depth to the set and final photo.

The lighting for this set was rather simple.  The main light was coming from a strobe about 10-degrees off center to my right, which had a 7-foot umbrella with a sock on it. This light was at about ¼ power throughout the whole session and light the scene with a nice even soft light.  I then had another strobe that was about 45-degrees of center to my left with a beauty dish on it, which acted as a fill. That one was at about 1/8 power.  This set up gave me a nice high-key commercial look.  You can see this set up below.  Then when I went for the more low-key editorial look, we switched out the beauty dish to a bell reflector with a 30-degree grid to create more of a spot look. This light then became the main light while the light with the umbrella became the fill light. We did not change the position of the light stands. 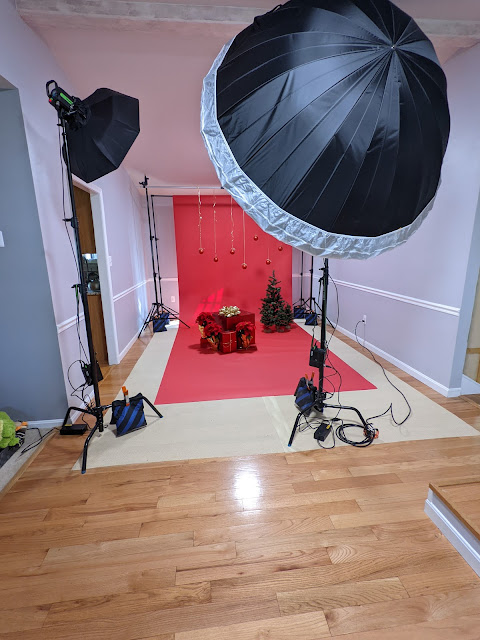 Now for the actual photo session. For this session I used an ISO of 100 and an aperture of F9, with a shutter speed of 1/200s.  I wanted to ensure everything was in focus so went with a higher F-stop. My focal length ranged from 28mm to 100mm with 40mm being the most common focal length.  While I normally shoot very wide, the size of the umbrella made me shoot further away from the subject and zoom so that the umbrella wasn’t in the shot. For a majority of these photos, I was sitting on the floor so I was shooting under the edge of the umbrella.

I had a ton of images that I absolutely love come out of this session. My favorite is one of the last images from the session. To get this image the strobe with the umbrella was turned down to an 1/8 or less power. The strobe with the bell and grid on it was at about a 1/4 power. Then I had a secret light, which was a speed light that was being hand held by my assistant about 75-degrees of center to my right. The speed light was zoomed to about 105mm and aimed towards the model’s face.  The lighting works for this image because it makes it very sultry and editorial image. When editing the image, I cleaned up a few spots where you could see the backdrop stand legs, and did basic edits. I did consider removing the ribbons coming down behind the model, but then I had to ensure I was removing the correct shadows. I did attempt to take them out, but realized the image didn’t look balanced so I ended up leaving the ribbons. 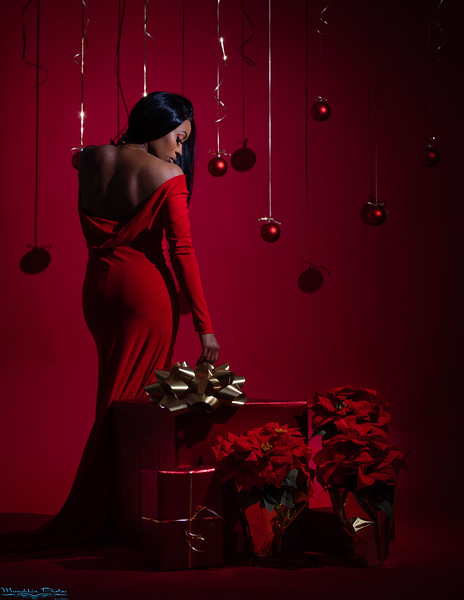 The next image is a complete opposite of the first image. It is bright, high-key, and very commercial.  The image has nice even light due to super big umbrella and just a pop of light on the model’s face due to the beauty dish. When editing this image, I did clean up a few areas where I could see the feet of the backdrop stands. I also removed the ornaments because how this image was cropped only about half of the bottom portion of ornaments were showing, thus a distraction. I also did a little bit of dodging and burning to bring out a little more separation in the poinsettia leaves. I also some basic edits. This made a nice clean image, that I added a vignette too just to add a bit more depth and interest to the final photo.

As I described in the set design and seen the set-up picture, I had a few small pine trees in the original set. However, as I was working with the model and going through the shoot, I determined the little pine trees really didn’t work with the overall aesthetic of the images and were more of distraction because they weren’t red or gold.  So, I ended up removing them after several frames.  This is one of the few images with the pine trees in the background. It might have worked if I had more trees but then we run into the issue that the set might be too busy and distract from the model.  As you can see, we have nice even lighting in this image giving it a nice happy feel. When editing the image, I did basic edits and added just touch of brightness to the model’s face.  I also removed the deep shadows within the pine trees so they had depth and did not look like dark blobs.  I also used the liquify tool to help smooth out some of areas of the dress, because the dress can be very unforgiving to even the thinnest of models. I finished the image off with a very light vignette just ensure it had a bit of tonal depth.

Overall, I’m very happy with how this session turned out.  I liked working with the red on red with pops of gold as accents. The feel the images are very refined and show how one can go from a very commercial look to an editorial look with the same set, just by changing up the light modifiers and strobe powers.  A select number of images from this set are expected to be published in the up coming issue of MoevirMagazine.