On December 4th, I did a styled holiday session with ViNa. This session was all about fun, cuteness, and candy; thus, demanded to be a high key session.

I got my inspiration for this set and session from the headpiece itself and several images on Pinterest.  Now since I had another holiday session right before this session, I wanted to take advantage of the previous set pieces and just incorporate a few additional elements. I stared with the red Savage seamless background as the base. I turned a large wooden posing box into a present. I then added the smaller posing box from the previous session to the background and placed the miniature pine trees on top. I also added silver ornaments to the painter’s pole to go with the red ones from the previous session. I then added a few candy canes to the set and some candy ornaments to the trees. I knew I wanted the headpiece to be the true center of attention so tried to keep the set simple and on theme.  As I worked through the session, we changed up the set by eliminating items and making it simpler throughout the shoot.

The lighting for this set was rather simple.  The main light was coming from a strobe about 10-degrees off center to my right, which had a 7-foot umbrella with a sock on it. This light was at about ¼ power throughout the whole session and light the scene with a nice even soft light.  I then had another strobe on boom arm that was about 45-degrees of center to my left with a beauty dish on it, which acted as a fill. That one was at about 1/8 power.  This set up gave me a nice high-key commercial look.  You can see this set up below.  Note the set up shows a bell reflector on the strobe, I took the picture of the set before doing the lighting test, which caused me to change out the bell for the beauty dish. 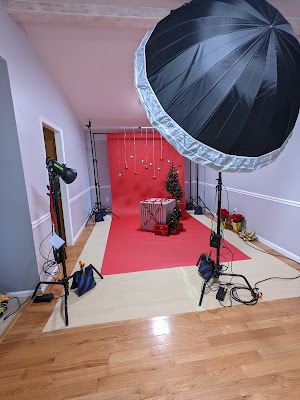 Now for the actual photo session. For this session I used an ISO of 100 and an aperture of F9, with a shutter speed of 1/200s.  I wanted to ensure everything was in focus so went with a higher F-stop. My focal length ranged from 28mm to 130mm with 40mm being the most common focal length.  While I normally shoot very wide, the size of the umbrella made me shoot further away from the subject and zoom so that the umbrella wasn’t in the shot. For a majority of these photos, I was sitting on the floor so I was shooting under the edge of the umbrella.

The goal of this shoot was to stay fun and flirty. Once I put the wig and headpiece on the model with the tulle dress, I knew exactly what I was going for, which was a very “kawaii” shoot. The outfit with the wig and headpiece also gave me Lolita fashion vibes, that is why I went for very cute and playful.  My favorite image from the session captures that fun and flirty feeling.  The lighting was great but I did have to some clean up in post. The first thing I did was remove some of the ornament strings behind the model’s head because they were distracting.  I then went in and filled in some gaps in the tulle using a mix of the patch tool and healing brush. The model was wearing black leggings under the dress so it wasn’t and issue during the shoot. I just wanted make sure the dress was as fluffy and filled in as possible. I then went in and lightened the trees, so they wouldn’t look so dark and bring back some details.  I finished the image off with a very light vignette.

This next image is a close-up to really focus on the headpiece. For this image I first went in and did basic edits, then removed the ornament strings behind the model’s head. I then used a little frequency separation to go in and even out skin tones and remove any small blemishes. I then used some doge and burn techniques to add some depth and texture to the tulle. I finished the image off by adding a very slight vignette to add some additional depth to the image.

This image was one of the last images we shot. I went very simple with just a box, the ornaments, and hand-held props.  The wooden box is hollow on the inside and big enough for the model to fit inside. So, I flipped the box over and the model got inside, so it would look like she was coming out of the box. I feel like the tulle is reminiscent of a bunch of tissue paper you would use the pack a present.  I did not do a lot to this image in post, I mostly cleaned up a few spots where you could see the backdrop stand legs. Then even out skin tone and removed any minor blemishes. I also used a little bit of dodge and burn to give the tulle some more dimension. The problem with working with tulle and very even lighting is sometime you lose the shadows that create the texture in the tulle. I then finished the image off with a very light vignette.

This final image is just pure and simple. No distractions so you can focus on the model and headpiece.  With the model sitting she was well below the ornaments so those did not act as a distraction and I removed all the set props except for one hand held prop. So, I have a nice clean image that could be holiday album cover art, which is good because the inspiration came from a holiday album cover.  I did basic edits on this image and used a square crop because it worked best for the image. I then used a little frequency separation to ensure even skin tones. The used some dodge and burn to add some texture to the tulle.  I finished the image off with a very light vignette.

Overall, I’m very happy with how this shoot turned out. I kept it high key, cheery, and cute while capturing a holiday spirit. The model did an excellent job of staying cute and happy to really make the images work.  A few of the final photos from the set are expected to be published in WHATever Magazine.  You can see the complete set here.