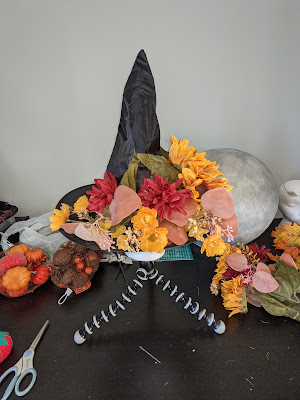 On October 9th, I did a styled session with Lady Chapell Cosplay. The theme for this shoot was an autumn witch, based around an autumn decorated witch hat. When I designed the set, I went for the “witchcore” aesthetic which is more home and garden then scary witch.

My inspiration for the set came from images by kladovay_mechta out of Russia, which used wicker chairs and a lot of pumpkins. I also took inspiration from some Pinterest post about the “witchcore” aesthetic, which is more of a styled Halloween and not scary. So, to bring my inspiration together I sourced a peacock chair, and a lot of pumpkins and gourds to surround it. I then added a small table, which I placed a large chalice and a foam skull.  I then strategically added fall flowers, candles, and a large fake spider. I then hid bowl that I would fill with hot water and dry ice to create some fog, to give the set that overall Halloween vibe.  Once the set was complete, I set up the lighting. Note I started with a basic set design, but modified it as I progressed through the session to create three unique but similar sets.

The lighting for this set used four different lights, with each light serving a purpose (see lighting diagram). I had two strobes with square gridded soft boxes on them. The strobe to my right was the main light angled towards the model and focused on her upper body. The second strobe to my left was used to fill out the shadows. The strip box with the grid, was placed on the ground to my left, with a gelled speed light inside it. The strip box was angled to light the pumpkins and gourds.  The final speed light was gelled and flagged, connected to the backdrop on my right, and pointed down towards the table.  The speed light connected to the backdrop acted as a rim light, and I turned it on and off to affect the tone and mood of the image.

Note I was working with dry ice during this session so took extra precautions. If you work with dry ice, you should be in a well-ventilated area. (I had an air purifier/fan running and windows open.) Remember to wear gloves when handling the dry ice, and the hotter the water the greater the amount of fog created but for a shorter duration of time.

My favorite image from the session is a very relax pose, that just looks like a witch lost in a little day dream. I also like how the orange gel worked with the model’s skin tone and brought a nice warmth to the overall image. When I processed this image, I did the basic edits and cleaned up the image some.  I also used a little bit of frequency separation.  Because the candles were fake and their little flames didn’t show up on camera, I had to edit in the candle glow. To do this I created a separate layer then place a round dab of orange/red on each candle then change the blend mode to brighten. I then created a dodge/burn layer and went through and added highlights to all the areas that the candle light would have hit. I then flattened the whole image.

This next image I feel is very close to either a fashion image, and throughs off the relax and in charge head witch vibe. I processed this image just like the previous image.  The only difference is that the speed light attached to the backdrop is not on in this image, and the image relies on the strobe to my right to light the image.  You can tell because there is no rim lighting coming from the upper corner of the image.

I like this final image because of the overall vibe of the image, with the chair, the bubbling chalice, skull, and pumpkins; it just gives off the Halloween/Autumn Witch vibe. It really captures the essence of witchcore. As you can see in this image the gelled speed light attached to the backdrop provides a nice rim light as well as adds a warm depth to the image.  I edited this image the same way as the previous images. It was very important to use the doge/burn layer to make sure the details were correctly highlighted and balanced with the shadows.

This set of images shows how you can start with a basic set and make simple modifications to add variety to the images to keep them fresh throughout a session (my sessions are an hour). Overall, I’m happy with how the images turned out and how the set came together.  Images from this session will be published in the November issue of Know Magazine.