Today started with an early morning trip to WalMart to pick up a flat of water and some juice to replenish our supply.  We will use refillable water bottles in the park; we didn’t use those on the drive because they don’t fit in any of the cup holders.  After our resupply stop at WalMart it was back on the road to the Belton Chalet, which is just outside of the west Glacier NP entrance. 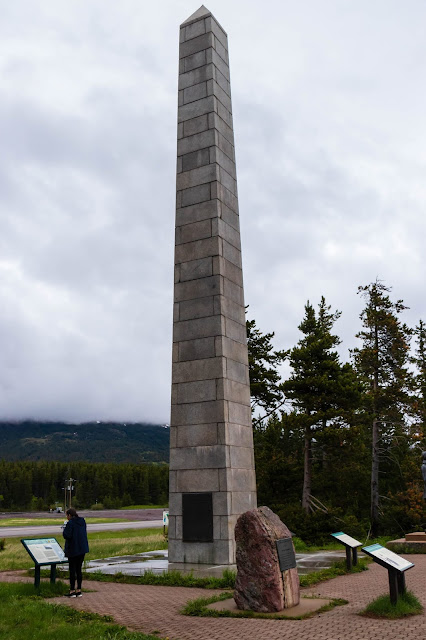 The drive started out very clouded over and stayed that way for about 75-percent of the last 25-percent of the drive had rain.  We stopped twice on our 4 hour drive, once at a gas station about half way in and then again at Marias Pass which is a two-for-one stop because there is also a monument to Theadore Roosevelt as well as signs about the pass.  The monument, which is an obelisk, was constructed in 1931 in honor of the president who made forest conservation a national policy.  From there it was on to the hotel.
We arrived too early to check in and their restaurant was not open yet, but the nice lady at the front desk directed us to Paul Bunion’s restaurant down the road for lunch. It is a restaurant, bar, and casino (being it had slot machines).  The food was good, and they serve ranch with their french fries, but never fear ketchup lovers, ketchup was on the table.  Since we still had some more time to kill before we could check in, we stopped at the Glacier Distilling Compnay’s tasting room.  There we tried several of their fine spirits.  They provide tasting flights of 4 different liquors at one time in about ¼ shots or less per liquor on the flight.  Jim and I had one flight each and then shared a flight, while Bill and Christina had two flights each, with everyone sharing sips from their flights.  Based on all the tastes I don’t think we even managed a full shot for each of us.  I ended up buying a bottle of Cherrycello and Huckleberry Liquors, plus two airport sized bottles of Mule Kick.  After that we headed back to the hotel for check in.
The Belton Chalet is a historic hotel, so the rooms are tiny and use old fashioned keys. It should also be noted that the hotel is right next to the railroad because it used to be one of the main hotels used when people arrived by train to go to Glacier NP.   The hotel provides ear plugs if you don’t want to listen to the trains all night.  Tonight we will eat dinner at the hotel, get a good night’s sleep, and then tomorrow we will venture to Glacier NP for some hiking.