Today we left the hotel around 7:00AM to head to Wall Drug for breakfast.  Their breakfast was pretty good and reasonably priced for a tourist area.  We lucked out and were standing by the correct door when they opened for breakfast so we were at the beginning of the line, and beat all the bus tours in. After breakfast we walked around Wall Drug briefly before heading to Badlands National Park.

We stopped at the sign to get some pictures of the sign and the buffalo that like to hang out there.  Jim yelled at a stupid tourist who was going to attempt to cross the road and pet a buffalo.  The person slinked back to their car and gave us dirty looks as we drove by them. We were only looking out for the person’s safety and plus we didn’t want to be witnesses for an accident report.  We also informed the park ranger at the gate what happened so I think that car was going to get a talking to when it went through the gate.   Our first stop in the park was Pinnacles Overlook, but since the sun was rather high in the sky already, the area looked washed out.  Additionally, it was super windy (+30 MPH winds) and blowing up a ton of dust, so I only grabbed a couple pictures before getting in the car.  We only stopped twice more once at Yellow Mound and once at the visitor center before leaving the park.  It is ok we didn’t stop a lot, since both Jim and I have been to Badlands before. 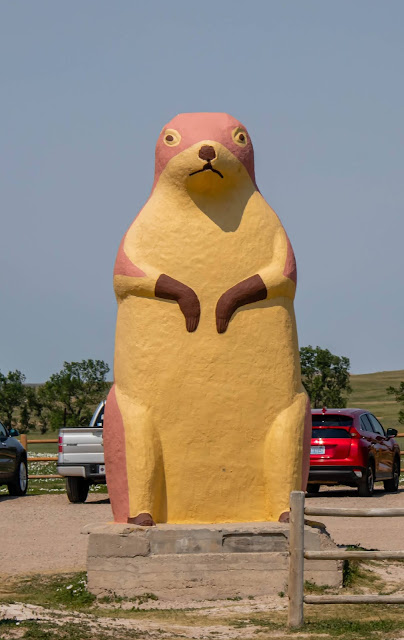 About a mile after you exit the park there is a large prairie dog statue, in front of a parking lot for a prairie dog “ranch”.  At this location you can spend a dollar for a small pack of unsalted whole peanuts to feed the prairie dogs.  Jim had luck feeding them and got a couple to pick up the peanut tossed to them, most of the ones I tried just ignored the peanut or let it fall down their hole for later.  This did allow me to get some good pictures of the prairie dogs.  I think it was worth the stop and the dollar would do it again.  After that we stopped briefly at the Minuteman Missile National Historic Site,  it was interesting.  We had a brief conversation with one of the older volunteers about ensuring to remove the “remove before flight” tags especially from the ejection seat before a flight. He apparently used to be in the military and I’m guessing served in one of the wars.  From there it was back on the road. 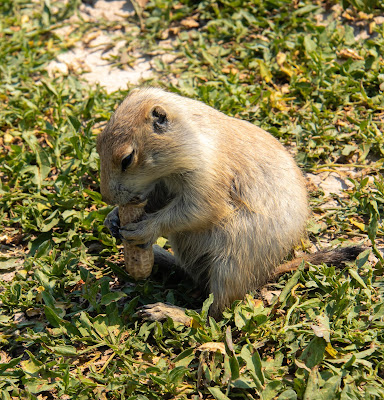 Our next stop was at the Dignity Statue, which is at a rest stop.  The rest stop also has a small free museum dedicated to Lewis and Clark.  I liked the statue. I wish I could have photographed it at sunset or sunrise because I think the colors would look amazing being reflected off the statue.  I recommend stopping if you ever have the chance,  you can also see the Missouri River from that location.  From that rest stop it was on to our hotel in Sioux Falls, SD.

Tomorrow we are bound for Davenport IA.  I will also be switching to cell phone pictures only now for the rest of the trip, since we have no major stops planned.