Last weekend I did a conceptual boudoir shoot with two new models, Hayley and Barbie.  The base idea of the shoot was to place the model in a plexiglass box, and fill the box with either ball-pit balls or flowers and tulle.  This concept was based on work done by @kimberly, on Instagram, where she filled a plexiglass box full of roses and posed inside the box.  This was not an easy shoot for the model, because they only had 16 cubic feet to work in, which is rather tight quarters.  I tested the box and set up before the shoot to determine were there might be issues,  besides it being tight quarters, it does get warm inside the box even with it having no top.  Thus, during the shoot, I made sure to ask if the models were doing ok and taking a break if needed.

For this shoot I used:

I made the box by taping the four sheets of plexi together to form the box.  I left one side un-taped so the model could get into the box, once the model was in the box, I would place three  small sections of tape along that side to ensure the box held its shape once the model and balls or flowers were inside.  Once we were done shooting, I sliced the tape with an exacto knife so the model could just walk out.  The plexi had to stay clean from dust, hair, and thread or they would show up in the images, even though I did my best I still had some dust and thread I had to photoshop out.  The lighting set up for this shoot had to very precise so that I would not reflect in the plexi and so that the strobes would not reflect in the plexi. The lights were placed at 45-degree angles from the center point of the box, and I shot straight on the front panel of the box. The model only had 4-square feet of floor space and 48-inches of height to move in, and had to make sure they were not bowing out any of sides of the box, or reflections would occur.

For this shoot,  I shot tethered. I shot all the 263 frames at ISO 100, with an aperture of F5, and a shutter speed of 1/200s and the strobes set to quarter power to drown out ambient light. My focal length ranged from 18mm to 60mm with 65 frames shot at 35mm.  I was shooting wide to ensure I got all the box and had room for cropping. Of the 334 frames I edited 191 frames, and released 124 final images.

This was an interesting shoot for me because I usually don’t shoot photos leaning heavily into the boudoir territory.  My two of my absolute favorite shots from this session were taken when the models were not in the box, and we worked with a scattering of tulle and flowers on the floor. In the one image you can slightly see the box in the back, because it still has some tulle draped over it.  I like both images because they are very soft and have a romantic feel. 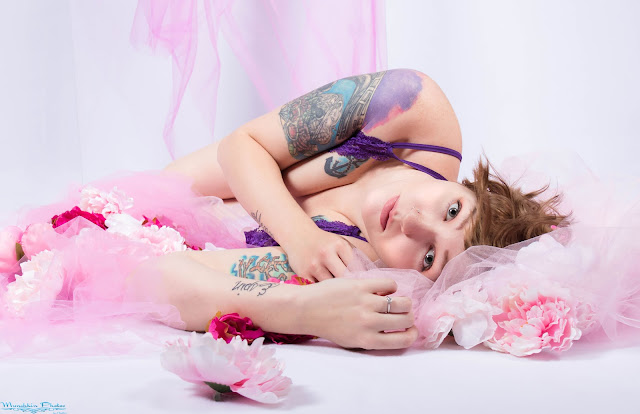 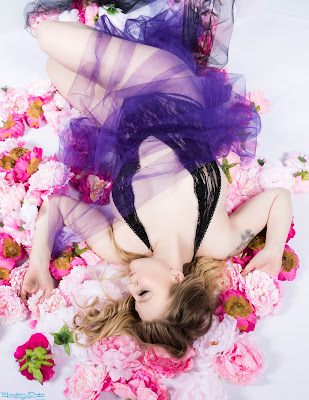 As I said previously, the models had very little space to work in once they were in the box and it was filled with either balls or flower and tulle.  I like the images with the balls, because it is a little different, but I think I need more balls for the image to really pop.  Also the box needs to be slightly bigger, by making the box slightly bigger the model would have a little bit more space to move in to allow for more pose variety, however, then more balls would be needed to ensure the balls came up to similar or higher height in the box.  I feel the images of the box with the flowers worked best with the tulle draped along the back and part of the sides of the box.  It gives the box more dimension and the overall image more feeling. 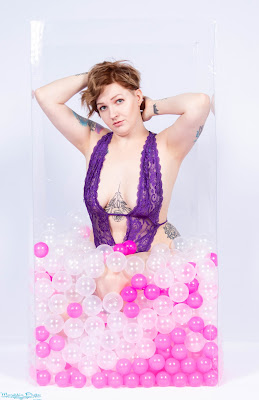 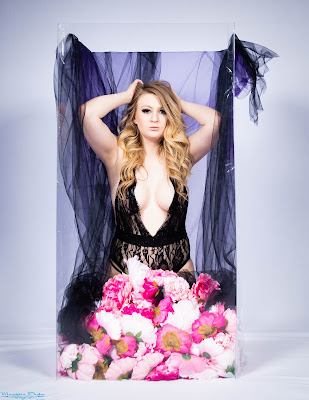 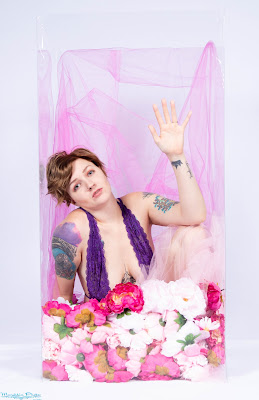 Overall, I loved the shoot concept of the plexiglass box. I think the idea could be used in a variety of session types and does not have to be limited to boudoir style only. Additionally, now that I have the plexiglass, I can use it for other stylized shoots, such as faking being under water or were ever else my imagination can take me.