Today was our last full day in the Galapagos. It started with a 7:30 AM pick up to go snorkeling on Tintoreras. We were supposed to do that yesterday but the tour company changed the itinerary on us because they thought doing the volcano and snorkeling in one day would be too much. This change had a domino effect on the rest of the itinerary, because it also changed our flight out of Isabella to San Cristobal which affected the things we where to do on San Cristobal. So I was picked up at 7:30 AM to go snorkeling. Jim did not go because he was having stomach issues, and just didn't feel like it. 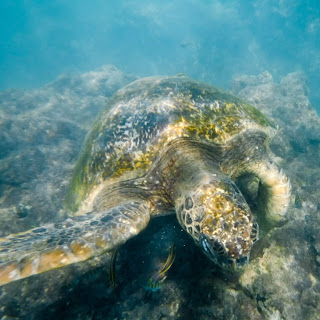 Snorkeling around Tintoreras was ok. The water was not as clear as in the other two locations I went snorkeling on this trip. However on this snorkel I got to see sea turtles up close and personal while in the water, swim with a penguin, and have two sea lions swim right under me. I was too slow to get a picture of the sea lions swimming under me. Also the water was colder in Tintoreras than other places, and considering this was a longer swim, I was rather tired afterwards. At the conclusion of the snorkeling, they took me back to the hotel where they were supposed to have a room for me to shower in. However they didn't, so I didn't get to shower, but I was at least able to change in the restroom into dry cloths.
Our guide picked us up at 11:45 AM to have lunch before our 1:30PM flight out of Isabella. Lunch was ok. From lunch we drove to the airport, which is more of an air taxi staging area. They weighed our bags, and checked them for fruit, from there we were good to go. It was a 45-minute flight on a 9 seat turboprop airplane. We flew at an altitude of 5,500ft, I was surprised that it was a smooth flight. Once arriving at the airport we took a taxi, which is just a pick-up truck, to the hotel, where we met our guide. After checking in and getting situated we had our little adventure on San Cristobal.
The guide took us sea kayaking. We launched from a sandy beach that had a bunch of sea lions on it. The launch was a bit wet since the water was getting a little rough closer into shore. Once we were out on the sea paddling it wasn't too bad. It was a double kayak, so hopefully I contributed to the paddling effort. We kayaked over to Darwin Cove and saw a few birds, several snorkelers, sea lions, and a sea turtle. After floating around for 10 minutes in the cove we paddled back to the starting point. That was basically the end of our adventure. We went back to the hotel, changed, and then went out to get something to eat. 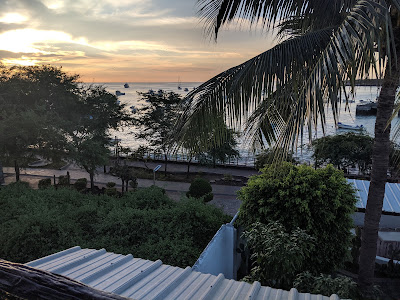 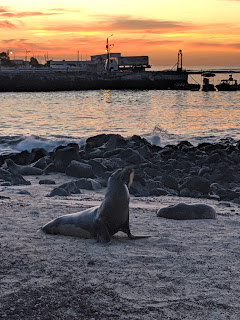