Day 0 - May 23
We flew from Cleveland to Atlanta to Quito on May 23. We left out of Cleveland, so Teddy could stay with his Grandma while we were on vacation. The flight from Cleveland to Atlanta was uneventful. We had a four hour layover in Atlanta so spent part of that time in the Delta Sky Club since Jim gets free entry. The Delta Sky Club had a nice “free” buffet layed out with several types of salads, pulled chicken, and a few other warm sides. We also had free drinks (alcoholic and non-alcoholic). I felt sitting in the Sky Club, was a much better option then just sitting at the terminal gate.
The 5 hour flight from Atlanta to Quito was uneventful. We landed in Quito at 10:30PM Central time and went through customs and immigration fairly quickly. The tour company representative met us past customs, and had a gift for us two Panama hats. (Side note: Panama hats are actually invented and made in Ecuador, but are called Panama hats because they were handed out to the workers building the Panama Canal. Thus are called Panama hats) We got to the hotel around 11:30 PM which gave us about 4.5 hour to shower and sleep before our 5:00AM pick-up to go back to the airport for our flight to Baltra in the Galapagos.
Day 1 - May 24
The tour company representative picked us up at 5:00 AM, and since we were checking out so early the hotel had a box breakfast made up for us. The breakfast included a yogurt like drink, yogurt, an apple, and a ham and cheese sandwich. It was ok. The tour company representative, personally took us through the Galapagos travel process, which includes getting a special visa, (which the tour company got for us ahead of time), getting our luggage scanned and tagged, and then actually checking in for the flight. The flight consisted of one stop on our way from Quito to Baltra Island where the only Galapagos Airport is. Fun fact: the Galapagos airport code is “GPS”. Second fun fact: The reason the Galapagos has an airport is because the US Military built an air base there during WWII, and when they were done using it turned it over to Ecuador.
The total flight time from Quito to Baltra was about 3 hour to include the short layover, were we did not leave the plane. When you land you end up going to the end of the runway, the plan then has to turn around and taxi all the way back up the runway to the airport to unload. You then go through the Galapagos immigration process and pay your $100 per person park fee. (The cost was included in our tour price.) From there our carry on bags were x rayed, and the contraband sniffing dog gave everyone’s checked bags a once-over. When done the dog got to play with his tennis ball and everyone got to get their luggage. After collecting our luggage, we met our tour guide for the day and boarded the bus to take us to ferry to get us to Santa Cruz Island where we’ll be for three nights.
Once on Santa Cruz we went to see lava tubes and one type of tortoise and have lunch. So contrary to my husband’s teasing, the tortoises did not all go on an off-island vacation. I got pictures of the tortoises. Lunch was good. It consisted of baked chicken, rice, roasted tomatoes, roasted mushrooms, and roasted asparagus. After lunch we checked into the hotel, to drop our bags off before walking to Charles Darwin Station. 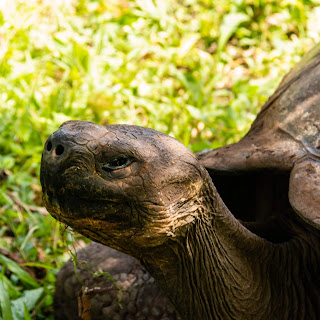 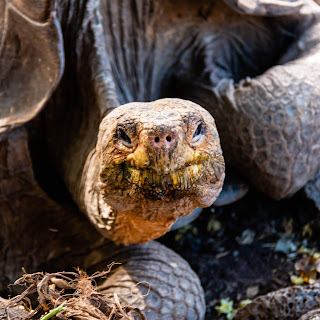 The walk over to Charles Darwin Station, think of it as park headquarters, was easy and we got to see our guide direct a small sea iguana out of the road and back towards the water. At Darwin Station we got to see other types of tortoises and the taxidermied “Lonesome George” who was the last of his species of tortoise. I thought the exciting part was going down to beach area to see a few sea iguanas. The sea iguana are black and blend into the black lava rocks on the beach. I got a few nice pictures, and one ran right towards me as it was getting out of the water. The guide said the seals can be worse and will get right up to your nose if you are sitting still. I kind-of hope that happens, I think it will make a good picture. Jim got a few pictures of the iguanas swimming. After that we headed back to the hotel. It is now time to shower, eat, and sleep. 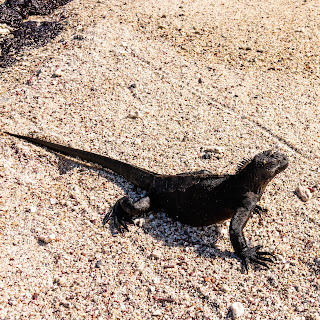 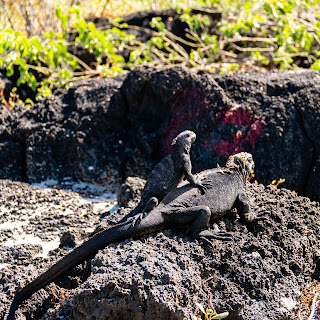