Back in July, I did a shoot that was variation of the milk bath shoots that are very popular. For my shoot I used black water and glitter, for a galaxy goddess shoot.  The shoot took planning and testing on my part, while the photos turned out good, I want to re-do the shoot at some point because it can be better.

This shoot had a complicated setup, and took place inside a garage with a 9-foot ceiling. The equipment used is as follows: 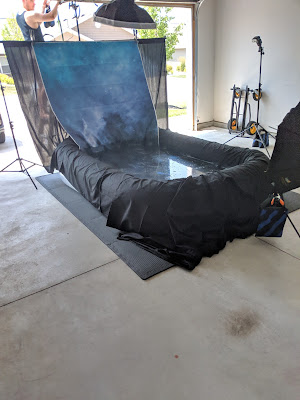 We placed foam exercise mats down on the garage floor, then placed the pool on top of those to prevent holes from forming in the bottom of the pool.  We then hung a 20-foot black backdrop, which only raised 6-feet and draped the rest across the bottom and edges of the pool.  The 7-foot galaxy backdrop was clamped to the black backdrop and allowed to dangle in the pool. The pool was filled with about a foot of water, which in hind site may have been a little too much, and then 5 “Little Black Dress” black bath bombs were added to turn the water black. Once the bath bombs completely dissolved I added the glitter across the top of the water.  The two speed lights were set to the right and left sides of the pool and pointed down towards the water to light the glitter.  The strobe in 24-inch softbox was suspended over the pool pointing down using a boom arm and secured to the ceiling with tie-down straps.  And one speedlight bounced against a sliver umbrella at the foot of the pool pointed towards the backdrop.  (See picture above.)

I worked with the lovely model Star and Aly Issabelle Makeup Artistry was the MUA for the shoot.  I supplied a white wig, that got ruined during the shoot (I totally expected the wig to get ruined), and a white tulle skirt that was long enough to use as a dress.  Allie did Star’s make-up using blues and slivers, to match the galaxy backdrop.  From there is was standard milk bath shoot, but since the pool was larger then a standard bathtub, it allowed the model more freedom of movement to get a variety of shots.  However, I needed to be more aware of reflections of the strobe, due to mirror like quality of the black water.  I did end up using the reflective properties of the water to my advantage in a few of the shots.

I took 270 photos, edited 80 photos, and posted 32 fully edited shots.  Thus, I had a return of approximately 11 percent. While my return was low, I think the photos are of higher quality, compared to when I have a 50 percent return.  I’m working on refining my selection process to deliver a tight high-quality set. For all the shots, I was at an ISO of 100 with an aperture of f5.6 and a shutter speed of 1/250s. My focal length ranged from 20mm to 100mm, with a majority of the photos being taken at 50mm.

My favorite photo of the set is this one below. The tulle wrapped around her wonderfully, and I like how other parts of the tulle were floating in the water under her to give it a bit of a milky galaxy cloud appearance in the water while maintaining the reflection. I also like how her eyes are connecting to the camera and she looks relaxed resting on the water.  I edited this to give her skin a white high impact glow, which does make her look paler then she actually is, however the white milky skin works. I also added some vignetting on the edges to draw attention to her face. I also used a frequency separation technique to balance out her skin tone slightly and get rid of any stray pieces of glitter stuck to her face.

The photo to the left I thought I was going to have to get rid of, because it had the reflection of the soft box in it.  However, because the soft box was round, I was able to transform it into the moon. So, it looks like she is cradling the moon in her arms.  I added the moon by layering a picture of the full moon over the image, I then used darken as the layer blending method to bring out the texture of the moon and merge with the reflection of the soft box.  From there I refined the overall photo.

Overall, I’m happy with the session but will change things for future pool shoots.  For one, I will not mount the light directly above the model so it reflects in the water.  I will also use less water in the pool, probably only six inches, because I think with a foot of water the model had to contend with floating thus had to work a little to hard to maintain some of the poses.  You can see all the images from the shoot here.