Back to the Parks

We went back down to Wind Cave this morning to do a cave tour.  We got down to the Wind Cave Visitor center a bit before 9:00 AM so we missed out on the 9:00 AM cave tour, so we took the 10:00 AM cave tour.  While walking around the visitor center to kill some time, we ran into a couple I graduated highschool with. They were there for their family vacation.  We did the hour and half natural entrance cave tour, which was led by a park ranger from Puerto Rico. The ranger was entertaining while being informative.  The cave itself is interesting, but it does not have the large stalagmites and stalactites that other caves have, it also does not have any bats or living creatures in it.  Also, the cave is a dry cave, so there is no additional formations being made. It is a nice cave and I would do one of the other tours, but I thought Luray Caverns had more interesting features.

After the cave tour we went and had lunch at the Dew Drop Inn and Restaurant, before driving back to Rapid City through Custer State Park.  We wanted to feed the burros again, but they were way out in the field and not near the road. So we didn’t get a chance to feed them. We got back to our hotel  and spent some time there before heading out to dinner and back out to the badlands.

We headed back out to Badlands NP around 5:30 PM to get there before sunset at 8:30 PM. However, when we left there were large dark storm clouds forming in the west and heading east towards the badlands.  I was really hoping they would not make it to where we were going to be, because the sky to the east was clear and blue.  Sadly the clouds were traveling in our direction, and there was lighting in the distance. We go to the park entrance as the large dark cloud was starting to hover over the park. I made the decision to go through the gate to the first overlook.  We were rewarded with some mountain goats, which were hanging out by the overlook and some interesting light in the distance. However, it wasn’t the sunset I was hoping for. We took some pictures, then the wind started to intensify and then the rain started.  We got in the car and headed back. We will try again tomorrow, after we go out to Sturgis and Deadwood. 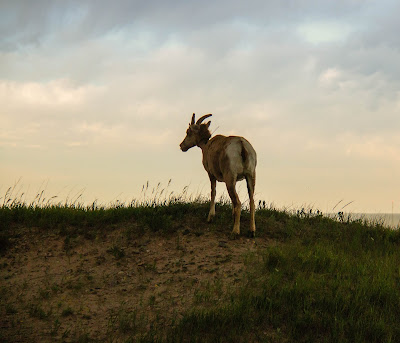 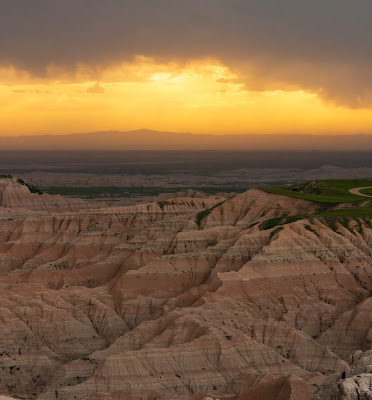