Last weekend I got to work with the lovely Vida Muerta on building her portfolio, with some standards.  Standard images are simple images with simple backgrounds (black, white, or gray) that encompass a head-shot/beauty shot, a ¾ length image, and full-length image that show off the model’s basic look. 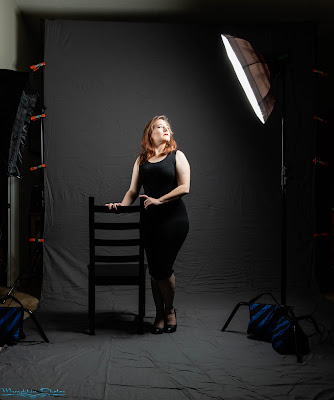 I did a simple two light set up for these photos with a grey backdrop (see left).  I used two Phottix Indra 500LC Strobes, one in a square soft box with grid and the other in a socked beauty dish set to the sides of the model.  I shot using my Canon 70D, an 18-200mm lens, and a radio trigger to activate the strobes.  I thought about shooting tethered, so there could be some instant feed back for my model, but my in-home studio is not conducive to corded tethered shooting.  So, in lieu of shooting tethered, half way through the shoot we stopped and reviewed the images and reviewed them again at the end of the shoot.

This is a note to models, do not be afraid to ask to review your shots especially if you feel like you are not understanding the direction being given by your photographer.  The benefit to being able to review your shots, is you can see what is and is not working.  As I mentioned I stopped half-way through the shoot with Vida Muerta to review the images to show her what I was seeing so we could discuss what was working and what wasn’t.   This led to more confident posing in the second part of the shoot resulting in more useable photos. I personally, do not mind stopping in the middle of studio shoot to review your images, especially if they are standards for a portfolio.   Also, this is very beneficial to new models so you can see how the poses you are using emphasize parts of your body and what you look like before the editing magic occurs.  I don’t do heavy re-touching on my images, no shrinking, warping, smoothing, or expanding of the body.  I just remove any blemishes that could go away on their own like zits or get rid of stray hairs and make-up flecks.  I do try to keep my images natural in that respect.

During this shoot I took 191 shots, edited 34 main images doing both color and black &white images for 18 thus resulting in a grand total of 54 final edited images.  However, I only delivered 46 images, thus the return was 24 percent. This is a little below average for me, but I was being pickier then usual on these images.  I shot all the images using an ISO of 100 and an aperture of F5.6.  My shutter speed had an even distribution between 1/100s, 1/125s, and 1/160s.  Finally, my focal length did range from 18mm (one image) to 155mm (three images) with the sweet spot being between 32mm to 50mm.    It should be noted of the 46 images delivered, 13 were in black & white.  I placed them in black and white because it brought more attention to the models face and black & white was working very well for her and her style of posing.

My favorite image from the shoot (right) was when I told her to think 1920s rich tragic heroine. This image reminds me of an old Hollywood image.  The socked beauty dish, acting as the main light, was raised to the models left and pointed down towards her face.  The square soft box was to the models left and about even with face and about a ¼ of the power of the main light.  The image was shot using ISO 100, an aperture of f5.6, a shutter speed of 1/160s, and at focal length of 32mm.  I converted the image to black & white because that was direction the image and mood pointed me.  I also softened the image slightly to put a bit of a glow on the model’s skin.

Finally, I will say when editing the images from this shoot it was very hard for me to stay away from a darker noir feel edit, because her dress, posing, and facial expression just were leading me that way.  Also, I tend to edit my images a bit to the darker side almost low key, as compared to a bright high key shot.  Thus, is was just difficult to do brighter images.  Overall, I’m happy with how this session turned out.  I also highly recommend working with Vida Muerta and supporting her on her modeling journey through her patreon site (https://www.patreon.com/VidaMuertaModel).