20 Feet of Red Fabric and Blossoms

Near the middle of April, I did a fashion/editorial style cherry blossom shoot, with Orisen Cosplay who was wearing the lovely “endless fire” dress, with a 20-foot train, rented from Dream Shoot Rental.  For this evening shoot, I used a three light set up which included a honeycombed key light, a shoot through umbrella fill light, and a straight speedlight as a back or rim light.    I positioned the key light using a C-stand with a boom arm so the light could be placed within the branches of the tree and angled down onto the model.  I also put a large honeycomb grid directly onto the flash head to narrow the light and provide a spot or beam of light look.  I used a flash inside a reflective bounce- shoot through umbrella angled up into the tree branches to light the cherry blossoms. I also place a flash with no modifiers directly behind the model to act as a rim light and light up the train of the dress to add depth to the shot.   Additionally, I shot using ISO 100, a focal length of 18mm, an aperture of 4.5f, and varied shutter speeds between 1/100s (18% of shots), 1/160s (50% of shots), or 1/250s (31% of the shots).  The flashes were fired in all shots and the power of the flashes were adjusted to eliminate as much of the ambient light as possible and varied throughout the shoot as the ambient light changed.

Below are a few of my favorite final photos from the shoot and one extreme edit.

To get this shot we tossed the train in the air several times to get this shot.  The exposure and contrast were increased slightly. The whites and highlights were completely darkened while the shadows and blacks were darkened slightly. I then applied a filter based off slide film with a poppy orange and teal colorcast. I removed the grain applied by the filter and adjusted the vignetting around the edges.  Also during post processing I removed my assistant (my husband), who was tossing the train in the air, from the shot.

In this next shot, we decided to drape the long train over the tree branch then had her sit on the branch and reach for one of the delicate cherry blossoms. I to give this shot more of moonlight feel, I applied a filter to put a blue cast on the image using a blue and grey split tone. I then adjusted the setting of the filter until I got the look I wanted. From there I added a heavy vignetting around the edges to bring focus to the model.

For this shot, I draped the long train on the tree branch and then had her lie along the branch looking up contemplation. You may notice the image has a slight downward tilt, because the tree itself was on a hill. I decided to keep the tilt of the image because it looked off if leveled. For this image the exposure and contrast was slightly increased along with the clarity and vibrancy of the image.  I then applied warming filter to the image that also gave the image a bit of punch. I then added a heavy vignette to the image but kept the some of the cherry blossoms lit.

As I mentioned earlier in the post, my assistant tossed the train so I could capture movement in the shot.  I found in several of the shots were the end of the train was just tossed towards the model; it took on a head shape similar to that of a dragon.  This inspired me to work with the image a bit more, and do a bit of composite work in Photoshop. The base edits included increasing the exposure, clarity, and vibrancy slightly.  I then used a medium contrast and added some slight vignetting.  I then pulled the image out of Lightroom into Photoshop to touch up the image by getting rid of distracting features and adding the dragonhead. The dragonhead is part of dragon stock image I found on the Adobe Stock Image site.  I placed the dragonhead by dragging and dropping the image onto the base photo then used the darken mode as the blend type for the layer. Then set at about 30% opacity I moved the layer around to properly position the head.  I then returned the layer to about 90% opacity and used several eraser opacities to remove and blend the dragonhead into the train of the dress.  I then adjusted the color of the dragonhead using the hue slider to get the proper shade of red.  I then flattened the image. Overall, I do not do a lot of composite or heavy edits within Photoshop, but I’m happy with how this image turned out. 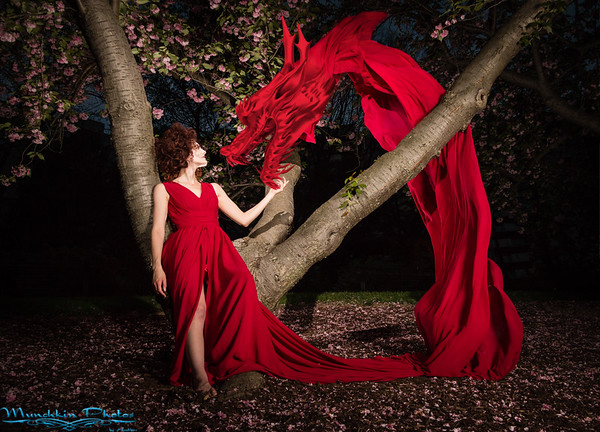 Overall, I’m very happy with how several of the images from this shoot turned out. Orison Cosplay was amazing to work with because she took the dress I gave her and created a whole character.  It also helped that she absolutely loved the dress and was not afraid to play with it, especially the 20 feet of train.  You can see all the images from the shoot here.